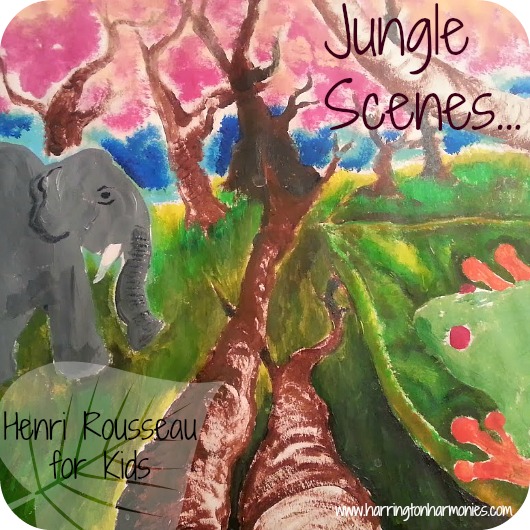 This Rousseau for kids lesson was one my students had so much fun with. We even had an “art show exhibit” at the end of the class where each student could share what they created. We took a bit more time on the project too so we could enjoy the process. The children loved the paint medium. And they got to practice a few new things they had never tried before: stenciling, painting techniques- various brush strokes, and incorporating more than one medium into a project.

For the picture study we read A Tiger in France ($.99 on Kindle)

by Lu Sylvan. The book was comical and energetic. A work of fiction. Delightful, but not a historical choice. However, I did feel that the book captured the essence of Henri Rousseau in a manner that other books would not. It gave me lots of opportunity to work in that all art doesn’t have to be realistic to be good. But that it is the expression, creativity, passion, and feeling behind it that makes it art. The book featured many of his popular pieces so we used it for the picture study as well.

If you’re looking for art prints alone you might prefer:

What you will need to make these colorful jungle scenes like Rousseau for kids:

We have used some of these terms before, but I notice they forget them and need to be exposed multiple times before it becomes a part of their true vocabulary.

If your child has never made leaf rubs, let them practice. Then make sure they know how to use stencils blotting around the stencil with paint dabs instead of tracing around the stencil. I let my students practice on separate sheets of paper. I also gave them time on the second day to practice a few painting techniques for flowers, grass, and tree bark. While demonstrating I showed them how their brush strokes can create texture, especially with acrylics, to create depth and perspective.

2. Stencil the animals. I chose to make a row of elephants trampling through the forest and a monkey hanging from the tree. But the main thing is helping your student understand that the paint they dab around their stencil will be the background of the jungle. They will later blend the animal stencil outline into the background surrounding their leaf rubs by using paint to fill in the missing spaces. If you have your student practice stenciling in their skill practice time, they will better understand this.

3. Have your student plan out their scene. Begin by discussing what animal stencils you will use.  Where will trees be? Where and what animals will there be? Plan your scene around the animals because they will be the negative space in this scene. You can certainly overlap any area you like, but begin your plan around them as they will most likely be the focal point of the painting.  Will there be grass at the bottom? What colors will you use? What color will your leaf rubs be? Where will they be?

4. Paint tree trunks and branches. Once an idea of placement for trees, animals, and grass have been determined begin by painting tree branches, trunks and vines. Consider the types of branches you will use based on the type of leaves you have. Use Rousseau’s paintings for inspiration.

*Though Rousseau’s paintings don’t use many swirls I decided to use them in my lesson. I used to live on Okinawa, and so I was imitating the Banyan trees of my memory, which had branches that grew both up and down. I always allow my students to paint and draw from their own ideas as long as they follow my main steps. Their works tend to come out much better if I give them some creative leeway.

5. Allow time for paint to dry before switching media. Once the branches and animal stencils are done, allow time to dry. In a classroom setting, we did the branches first and while they were drying I taught them about Henri Rousseau and his paintings. Rousseau for kids is fairly easy to teach because he was self taught and falls into the genre of Primitivism.  So I like using this project to allow the kids to paint freely their jungle scenes. They came out so beautifully!

6. Add leaf rubs in a variety of jungle color. The harder and darker these are the more they will be balanced in color scale to the paint. Choosing colors that will blend into the stencil paint used in each area is beneficial.

*Note: I like to have my students create their “crayon color palate” before beginning their leave rubs. They can always add more color but thinking color choice through first will give the painting more variety as well as continuity.

7. Now it’s time to paint the background and fill in white spaces. The children will mostly be filling in their backgrounds between the leaf rubs and the animals by painting leaves and blades of grass. (I also had them practice this  first.) Some overlapping is fine if it makes sense, but at this point I encourage them to limit painting outside the negative white animal shapes and focus only on the background foliage.

Student, Emma, with her Jungle scene.

8. Add the finishing touches. Most children wanted to paint the animals, but you can also choose to leave them as negative space in the composition. Adding enough details to make this project complete will take time. It may be desired to work on this project for a couple days. We spent two class sessions. Painting leaves and colorful flowers, as well as adding details and texture to the animals, will put to use some of the skills introduced in the practice session. Painting simple leaves, grasses and flowers requires simple technique that children can learn and apply to their own future compositions.

[Return to Lesson by Artist Index]

Warm Encouragement for Homeschool Moms: How to Beat the Homeschool Winter Woes 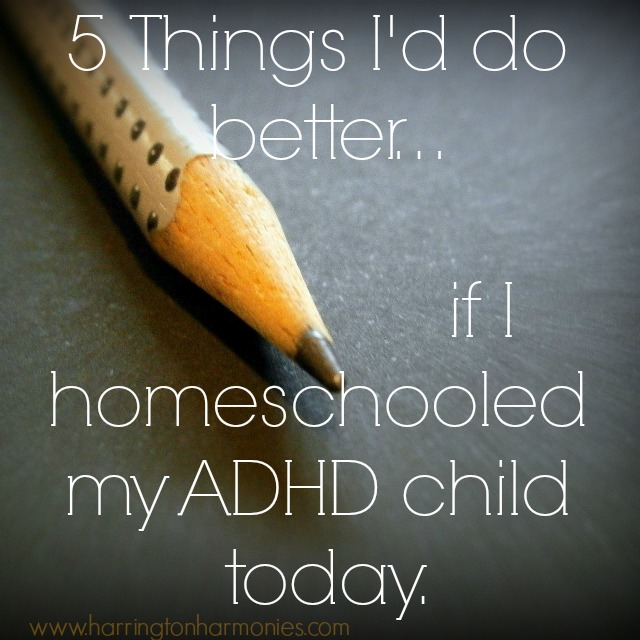 Labor of Love: How to Homeschool an ADHD Child 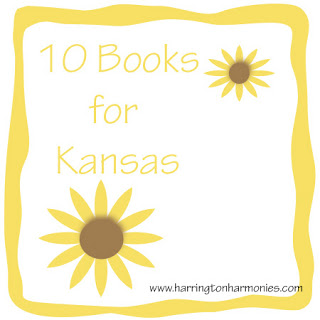 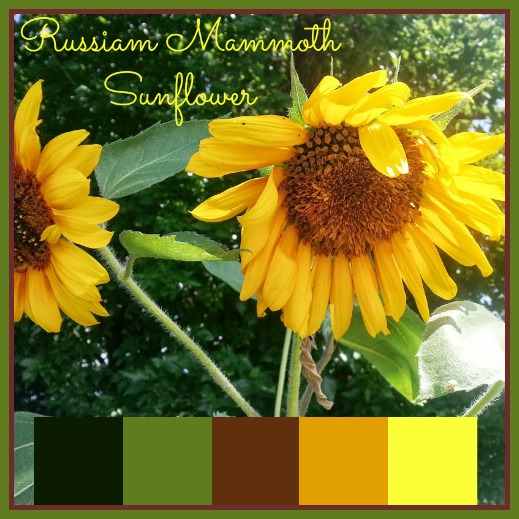 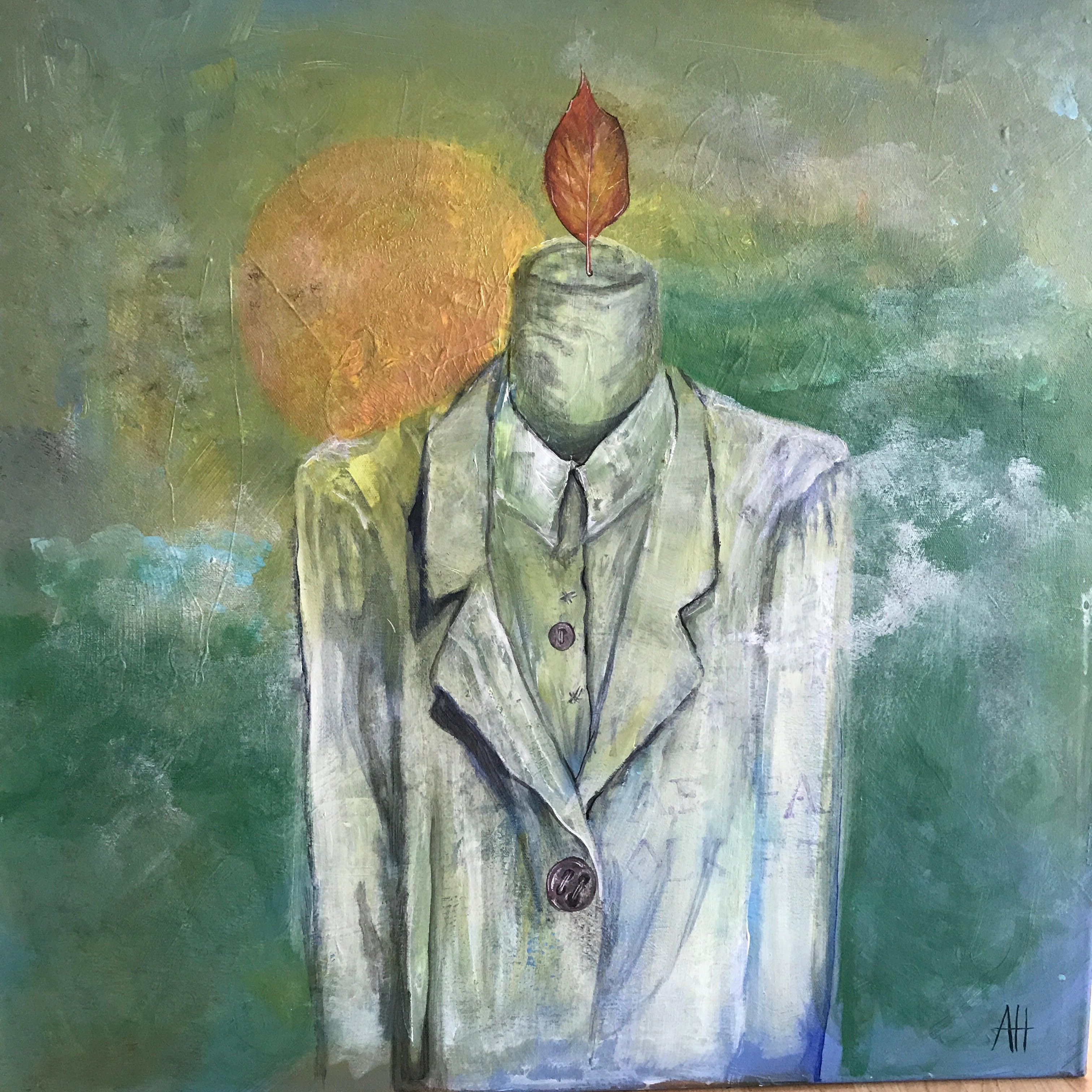 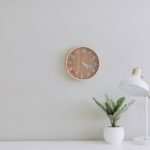 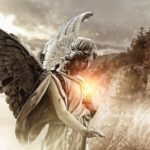